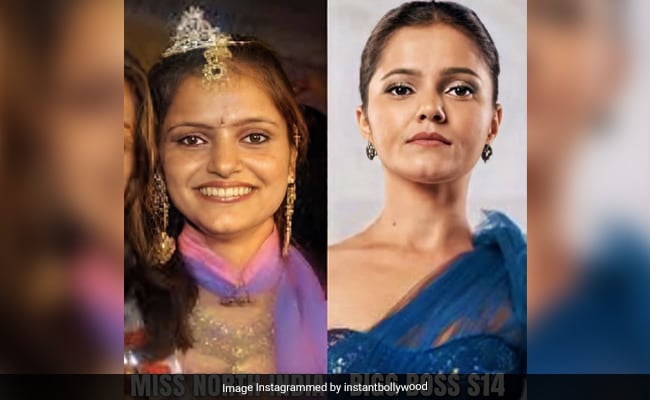 Before and after pictures of Rubina Dilaik. (Image courtesy: instantbollywood)

Actress Rubina Dilaik, currently a contestant on Bigg Boss 14, is trending again – no surprises there – but it isn’t because of the reality show. The Internet chanced upon an old photo of Rubina, ostensibly from when she entered and won the Miss North India beauty pageant as a teenager. Rubina, 33 now, is quite the veteran of beauty pageants – she was crowned Miss Shimla and also won other local contests. In the viral picture, Rubina wears a tiara and looks much less groomed and sophisticated than she does now which, given that she was very young, is no surprise – fans, however, can’t seem to get over her transformation.

See the before and after pictures of Rubina Dilaik here:

Rubina Dilaik is one of the more prominent contestants on Bigg Boss 14 and has locked horns with co-contestants Rahul Vaidya, Jasmin Bhasin and Sonali Phogat. Rubina is appearing on Bigg Boss with her husband, actor Abhinav Shukla – she revealed on the show that she and Abhinav had been heading for a divorce before their stint on the reality series. “Humne ek dusre ko November tak ka time diya tha. We were about to get divorced. Agar yaha dono saath nahi aate, toh shayad sath bhi na reh paate (We had given each other time till November. We were about to get divorced. If we hadn’t come here we would not have been together),” she said in a promo video released by the makers of Bigg Boss. Rubina and Abhinav married in 2018.

Rubina Dilaik made her debut on the TV show Chotti Bahu in 2008. She is best-known for her work on shows such as Saas Bina Sasural, Punar Vivah, Jeannie Aur Juju and Shakti – Astitva Ke Ehsaas Ki.