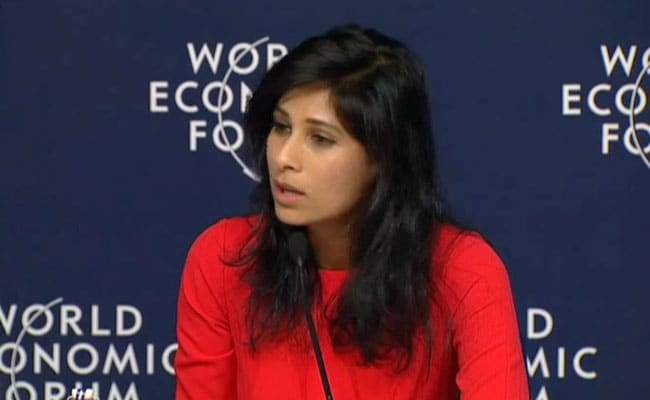 Ahead of the country’s annual budget presentation next week, the International Monetary Fund’s Chief Economist Gita Gopinath has favoured the extension of the pandemic support measures, thrust on investment in infrastructure, and expanding health sectors programmes like Ayushman Bharat, and a very credible divestment path for commercially viable companies. The Indian government has provided a lot of schemes for small and medium enterprises, most of which is in the form of liquidity support, Gita told PTI on Tuesday. “And you want to revisit it and see how effectively that is working and see whether additional support may need to be provided,” Gopinath said while responding to a question on her recommendations to Finance Minister Nirmala Sitharaman, ahead of her presentation of the annual Union Budget on February 1. (Also Read: At 11.5%, India To Be Fastest Growing Economy In FY22, Says IMF )

It would be a good time for banks and Non-Banking Financial Companies (NBFCs) to raise capital given the attractiveness of financing conditions at this point, she said. “We have to also keep in mind that as these pandemic measures are lifted, there would very likely be an increase in non-performing loans. Even the RBI (Reserve Bank of India) has projected that,” Gopinath said. But there might also be a need for the capital support to be provided by the government for public sector enterprises. That has been long on the table which is to improve governance of public sector banks, she said. Observing that there is a need for more public infrastructure spending, she said that the government has expressed an intention to do that.

“There are needs to make more public investment. That would be another area that would require thrust,” she said, adding that health is another sector which needs renewed focus. “In this pandemic, there has been spending but if you look at the health needs of the country, health capacity has to be increased. We can also see an argument for expanding Ayushman Bharat programme for instance and also increasing the number of medical personnel,” Gopinath said.

She said that there has to be progress made on the GST (Goods and Services Tax) collections. There seems to be a gap with compliance which is an important area to fix. GST collections surged to an all-time high of over Rs 1.15 lakh crore in December 2020 as economic activities picked up after the lifting of stringent lockdown restrictions. At Rs 1,15,174 crore, the collections were 10 per cent more than the mop-up in the previous month — the biggest growth in monthly revenues in the last 21 months. Gopinath said that another area that has been long-standing is divestments. That has been in every one of the budgets, but in terms of the actual implementation it has not happened, he said.

“To have some sort of a very credible divestment path for commercially viable companies is a very important part. Also, the insolvency procedures would require a lot of work,” Gopinath said. On Tuesday, the IMF projected an impressive 11.5 per cent growth rate for India in 2021. While this is attributable to the stronger than expected recovery, Gopinath said India still has some distance to go.
She said that due to COVID-19, India’s informal sector, like many parts of the world, has been hit hard along with unemployment in small and medium enterprises, micro small and medium enterprises.

Even if the economy is recovering, these distributional effects have also to be paid close attention to, she said. Responding to a question on coronavirus, the IMF chief economist said that India moved quickly to put down one of the strictest lockdowns seen anywhere in the world and it stayed that way for a long time. This had an impact on the economy, including a very large contraction in the first quarter of the fiscal year.

“But, with the reopening that happened starting the second quarter of the fiscal year and going forward, we are seeing mobility return faster than we had expected and importantly, despite that increase in mobility, there hasn’t been the next wave of infections which is quite different from what you see in several other parts of the world. “I am told by some experts that this is an outcome of what looks like a kind of natural herd immunity that has come around in many big cities in India.

That could be one reason for it. In terms of overall policy support, India has also overall provided a significant amount. It has tended to use more below the line measures than above the line measures. We still think that there is space for it to do some more,” Gopinath said. India, she asserted, has done a lot in terms of making sure there is liquidity in the system providing income in kind and in cash to poor households, helping small and medium-sized enterprises through liquidity channels.

She favoured the extension of these pandemic support measures that provided to low-income households in terms of cash and kind, the expansion of MANREGA that was done last year. “Both of those expired in 2020 and we would see a case for extending those even to 2021 until there is a much stronger recovery than we have right now,” Gopinath added.