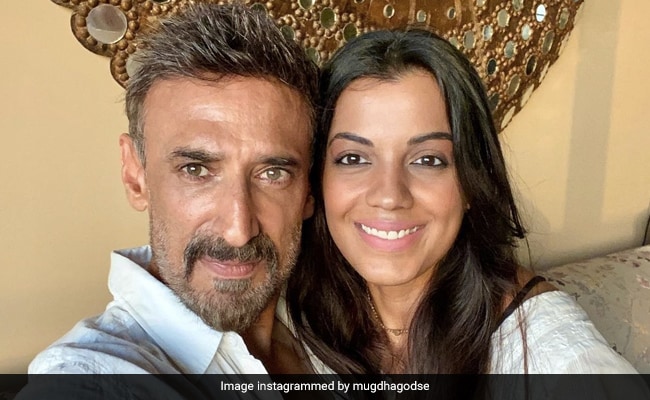 Actress Mugdha Godse occupied a spot on the list of trends on Saturday after she opened up about her age gap with boyfriend, actor Rahul Dev. The model-actress and Rahul have been together for more than seven years. Mugdha, in an exclusive interview with Zoom TV, said their age difference (almost 14 years, as per Zoom TV) isn’t an issue for her. “You do not decide it age hai. I do not look at it that way. Hum shopping nai karne jare hai, like red bag chahiye. You just know you fall in love and you realise it comes along with all these,” she told Zoom TV.

Mugdha Godse, who is known for her performance in Madhur Bhandarkar’s blockbuster Fashion, often shares loved up posts for Rahul Dev on her Instagram profile. On his birthday, she posted this picture from what appears to a café, and wrote: “Days like this…blessings on your Birthday.”

Here’s another picture from their Diwali celebrations:

Celebrating their 7th anniversary in July last year, the actress wrote: “7 years it is. Happy anniversary, Rahul Dev. Special mention to Anchal and Anupam whose wedding we met, in Jaipur! I guess shaadi.com effect was working during their wedding too!”

Check out this adorable post that Mugdha Godse shared on Valentine’s Day:

Rahul Dev was previously married to Rina who died after battling cancer in 2009. The actor has a son with Rina.

Mugdha Godse, after making her acting debut with Fashion, went on to feature in films like Gali Gali Chor Hai, Will You Marry Me?, Bezubaan Ishq and Heroine. Rahul Dev’s credits include Asoka, Indian, Omkara, Fight Club – Members Only, Dishoom and Pagalpanti.