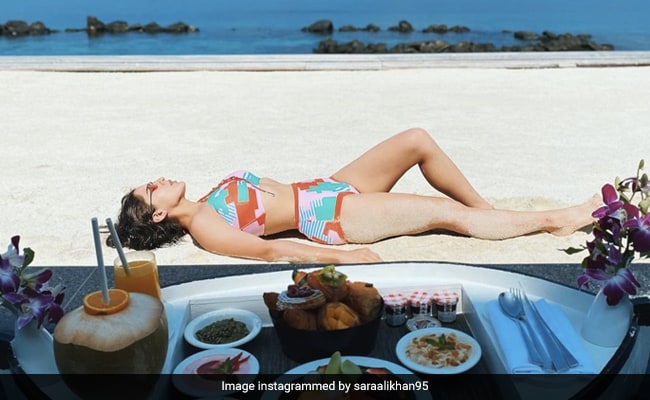 Hello there, Sara Ali Khan! The 25-year-old actress was in Maldives and lit up Instagram with stunning vacation photos. She added a bunch of them to her Maldives album on Sunday, which were accompanied by an ROFL poem, of course. Just like most of her poems, this one too has a reference to Iggy Potter – Sara’s nickname for her brother Ibrahim. Sara was in the Maldives with her favourite travel companions – mom Amrita Singh and brother Ibrahim. Here’s what she wrote: “When Sister Sara fears post binge bloat, Brother Iggy says ‘at least fatty will float’, Now that rhyme made sense so I can gloat, And to reward myself I will consume this entire boat.”

In the photos, Sara can be seen posing with a floating breakfast, which she promised to devour the entire spread, in her caption.

Sara’s colourful bikini is courtesy Shivan And Narresh, as shared by her stylist:

Earlier, Sara sent the Internet into an overdrive with these photos, summed up by a caption that said: “Sky above, Sand below. Live in the moment. Go with the flow.”

Sara Ali Khan was last seen in Coolie No 1, which was initially slated to open in theatres in May 2020. However, due to the ongoing coronavirus pandemic, it had a Christmas release. Coolie No 1 is a remake of David Dhawan’s 1995 film of the same name. Sara co-stars with Varun Dhawan in the film. Sara’s list of upcoming movies also include Atrangi Re, in which she co-stars with Akshay Kumar and Dhanush. Directed by Aanand L Rai, the film had booked Valentine’s Day 2021 as its release date.