Prime Minister Narendra Modi visited Tamil Nadu on Sunday and inaugurated a slew of projects including the extension of Chennai Metro Rail Phase 1 and a Discovery Campus for IIT Madras. He is set to visit Kochi in Kerala at around 3.30 p.m. to inaugurate several development projects in the poll-bound State.

“Tomorrow, 14th February, will be in Chennai (Tamil Nadu) and Kochi (Kerala). Numerous development works would be launched that would add speed to fulfilling the vision of Aatmanirbhar Bharat. The projects will boost ‘Ease of Living’ for our citizens,” Mr. Modi has tweeted in English, Malayalam and Tamil from his official handle.

Here are the latest updates:

He speaks on support proved to displaced Tamil in Sri Lanka, and the Tamil fishermen captured by Sri Lanka.

“There are currently no fishermen in Sri Lankan custody,” he says.

He concludes his speech by asking them to stay alert in the fight against COVID-19.

The Centre has accepted the demand of Devendra Kula Vellalars that they would be called so and not known by the individual sub-sect names henceforth, says Prime Minister Narendra Modi. He says that the Bill to this effect will be passed in the upcoming session of the Parliament.

“When they approached me, I told them that Devendra rhymes with my name Narendra, so I understand their name,” he says, adding that this is more than just a mere name change.

A tank made in TN will be used to defend our borders in northern India; this shows our united nature: PM Modi

“One of the two defence corridors is in Tamil Nadu. It has already received an investment commitment of over ₹8,100 crore,” says PM Modi.

“A tank made in Tamil Nadu will be used to defend our borders in northern India. This shows the united nature of India,” says the Prime Minister.

“India believes in peace. But, it will protect sovereignty at all costs,” he adds.

Remarking on the Discovery Campus of IIT Madras, PM said that he is sure that it will very soon be the leading centre of discovery. It will draw the best talent from all over India, he says.

PM Modi says that the Chennai Metro rail extension project was completed on time despite an pandemic. He says that the material for the 9.05 km stretch was procured locally, and supports his idea of ‘Aatmanirbhar Bharat’. 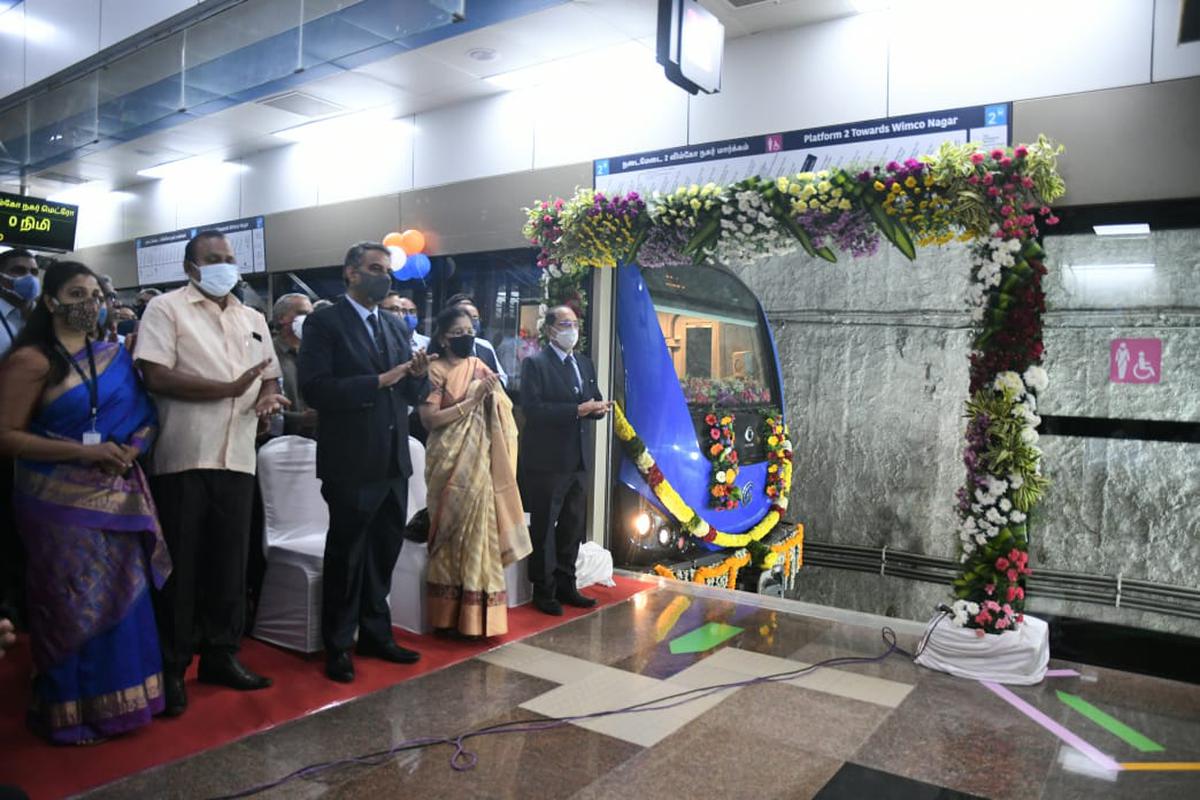 Prime Minister Narendra Modi (not in picture) inaugurated the Phase-1 Chennai Metro extension from Washermenpet to Wimco Nagar on February 14, 2021. The picture was taken at Washermanpet underground Metro Station.

The electrification of Villupuram – Cuddalore – Mayiladuthurai – Thanjavur will be great boon to delta districts, he adds.

He also paid tribute to the soldiers who lost their lives in Pulwama attack. He recites a Bharatiyar poem in Tamil to describe the importance of defence projects in the country.

“Vanakkam Chennai”. Prime Minister Narendra Modi starts off his speech by praising the “enthusiasm” of Chennai. He says the projects will further the growth of Tamil Nadu.

“Chennai is full of energy and enthusiasm. It is a city of knowledge and creativity. From here, we begin key infrastructure projects. These projects are symbols of innovation and indigenous development,”he says.

He recites a poem on the importance of conserving water, and says that the aim is to maximise each drop of water available. “Always remember the mantra of ‘Per drop, more crop’,” he says.

After a slew of railway project inaugurations, Prime Minister Narendra Modi unveiled the foundation stone for the Discovery Campus of IIT Madras. The campus will be built at Thaiyur near Chennai in Tamil Nadu at an estimated cost of ₹1,000 crore in the first phase, over an area of 2 lakh sq.m.

Prime Minister Narendra Modi inaugurated the railway electrification of single line section in Villupuram-Cuddalore-Mayiladuthurai-Thanjavur and Mayiladuthurai-Tiruvarur in Tamil Nadu. The ₹423 crore project has electrified the route, which is 228 km-long.

The electrification of this route would enable the free flow of traffic without the need for a change of traction between Chennai Egmore and Kanniyakumari and would result in saving of ₹14.61 lakh per day on fuel cost, says the government.

Additionally, he unveiled the foundation stone for the extension, renovation and modernisation of the Grand Anicut Canal System. The canal is important for irrigation in the delta districts of Tamil Nadu.

The modernization of this canal will be taken up at a cost of ₹2,640 crore and will lead to an improvement in the water carrying capacity of the canals.

Prime Minister Narendra Modi inaugurated the extended Phase 1 of Chennai Metro Rail which will commence its passenger services from Washermenpet to Wimco Nagar. He flagged off the train as the crowd around him chanted “Bharat Mata Ki Jai.”

It was completed at a cost of ₹3,770 crore. This 9.05 km long extension will link North Chennai with the Airport and Central Railway Station. About 2 lakh people are expected to use this stretch daily, according to the official report.

He also inaugurated the fourth Railway line between Chennai Beach and Attipattu. The line is a 22.1 km section through Chennai and Thiruvallur districts, and is expected to reduce operational bottlenecks from Chennai Port, Ennore Port and other major yards. It was laid at a cost of ₹293.40 crore.

Prime Minister Narendra Modi on Sunday handed over to the Army the home made Arjun Main Battle Tank (MK-1A) in Chennai.

Prime Minister Narendra Modi is set to officially hand over the indigenous Main Battle Tank (MBT) Arjun Mk-1A to the Army in Chennai on February 14.
| Photo Credit: JOTHI RAMALINGAM B

At a function, he also accepted a salute by the state-of-the-art tank, indigenously designed, developed, and manufactured by DRDO’s Combat Vehicles Research and Development Establishment here.

Deputy Chief Minister of Tamil Nadu O. Panneerselvam welcomes PM Modi to Tamil Nadu, and thanks him for the interest he has taken in the progress of the State. He praises the Prime Minister’s work ethic and cites his speech in Rajya Sabha during this year’s Budget Session to appreciate his “emotional side”.

He said that the projects PM Modi will inaugurate will help in the development of the State.

Prime Minister Narendra Modi arrives in Jawaharlal Nehru Indoor Stadium in Chennai to unveil several key projects for the State. He is welcomed with traditional nadaswaram music. The crowd, following social distancing in the wake of COVID-19 pandemic, welcomed the PM enthusiastically.

As PM Modi’s event nears, police is ensuring that no one is wearing balck inside the inauguration venue or in the route of PM’s vehicle. 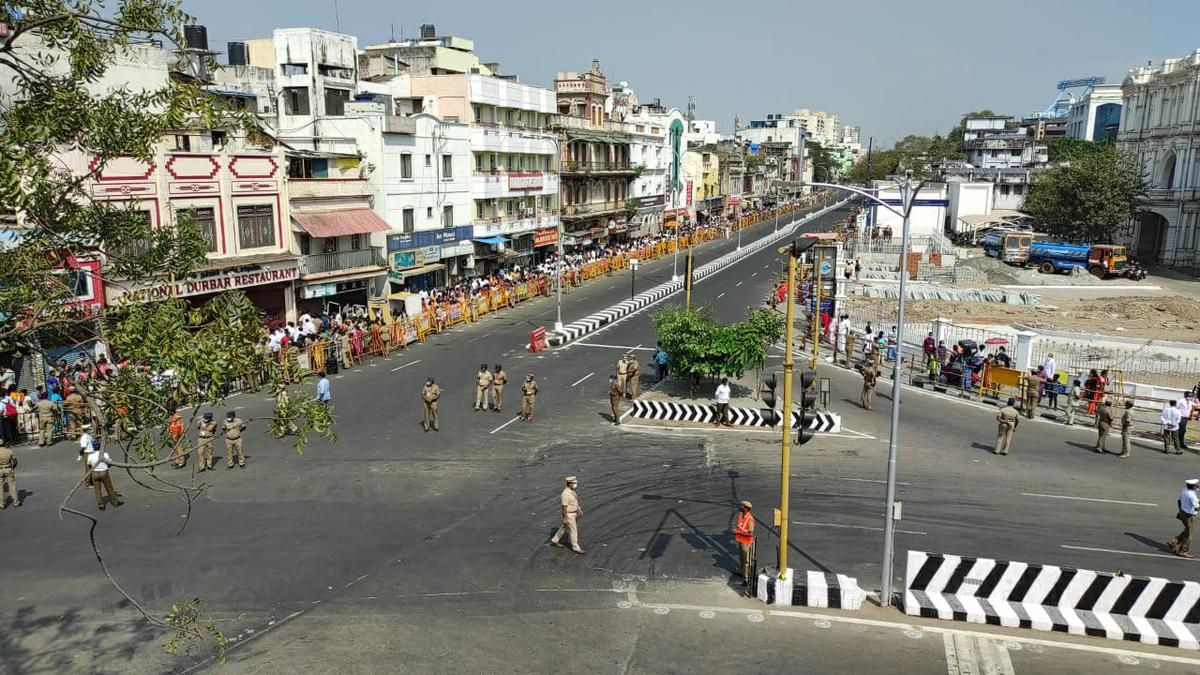 Earlier in April 2018, when the Prime Minister visited Chennai, he was welcomed by hundreds of black balloons with the words ‘Modi Go Back’ printed on them. Black flags were hoisted at the houses of opposition leaders and thousands of cadre as well.

Prime Minister Narendra Modi’s aircraft has arrived in Chennai as per schedule.

Mr. Modi will hand over to the Army the state-of-the-art the Arjun tank, which has been indigenously designed and developed, and manufactured by the Combat Vehicles Research and Development Establishment, DRDO along with 15 academic institutions, eight labs and several MSMEs, it noted.

He will also inaugurate the Chennai Metro Rail Phase-I extension, completed at a cost of ₹3,770 crore, and commission passenger services from Washermenpet to Wimco Nagar. – PTI

Security agencies have installed anti-drone jammers at vantage points as part of an elaborate security arrangement for Prime Minister Narendra Modi who will be visiting Chennai on Sunday to launch various projects. The Prime Minister is scheduled to stay for about three hours in the city before proceeding to Kochi.

Security stepped up in Chennai ahead of PM’s visit

The police are making elaborate security arrangements ahead of Prime Minister Narendra Modi’s visit to the city to take part in a public programme on Sunday.

Workers affiliated to five unions will boycott the inauguration of the Propylene Derivatives Petrochemicals Project at Bharat Petroleum Corporation Ltd. (BPCL) by Prime Minister Narendra Modi here on Sunday in protest against the disinvestment of the public-sector company.

The unions said in a release here on Friday that the inauguration of the project despite the start of production in the plants is aimed at cashing in on the Assembly election due in the State. The workers affiliated to Cochin Refineries Workers’ Association (CITU); Cochin Refineries Employees Association (INTUC); Refinery Employees Union (KR); Kochi Refinery General Construction Workers Union (CITU); and Kochi Refinery General Construction Workers Congress (INTUC) will boycott the programme.

The unions alleged that the Prime Minister was adopting double standards by dedicating a project to the nation while going ahead with its disinvestment process. The Union Budget had reiterated that the sale would be complete in the 2021-22 financial year, it said.