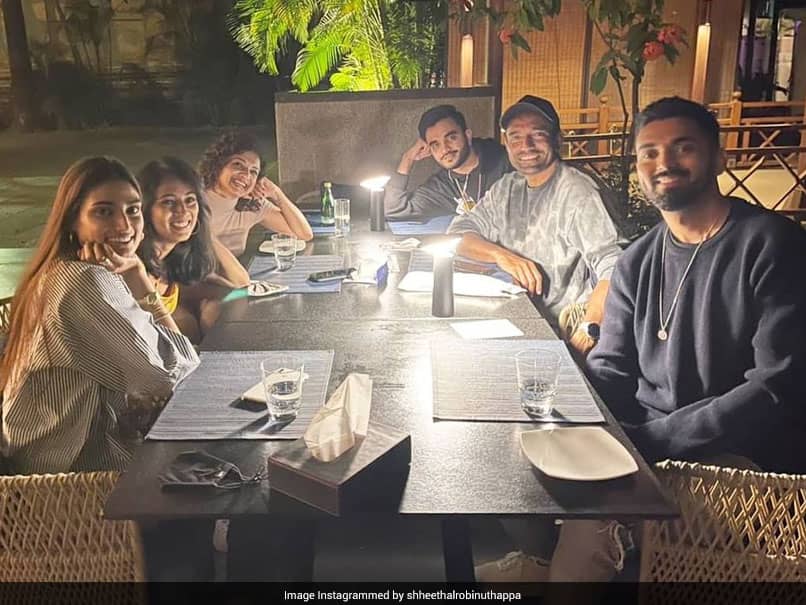 KL Rahul and Bollywood actor Athiya Shetty joined Robin Uthappa and his wife Sheethal for a get together.© Instagram


Indian cricketer KL Rahul and Bollywood actor Athiya Shetty joined Robin Uthappa and his wife Sheethal for a get together, as visible in the pictures posted by Sheethal’s Instagram account. Rahul, Athiya and Robin can be seen sporting wide smiles while posing for a group picture sitting on a table. “I’v grown up having the most amazing friends who have been my family from the very beginning .. and so blessed to have that family growing at every stage of life #friendswhoarefamily #love #grateful,” Sheethal captioned the images on Instagram.

Rahul was most recently seen in action during the just-concluded tour of Australia, where he played in limited-overs matches.

The wicket-keeper batsman scored 93 runs in three matches of the 50-over format, while managed 81 runs in the shortest format.

Rahul was part of India’s Test squad but didn’t feature in any of the Test matches. He had to return home after suffering an injury batting in the nets. Despite battling with so many injuries, Indian team led by Ajinkya Rahane won the fourth match in Brisbane to clinch the series 2-1.

The 28-year-old sprained his left wrist while batting during a practice session at the Melbourne Cricket Ground (MCG), ruling him out of the remaining two Tests.

Uthappa was most recently seen in action during the ongoing edition of the Syed Mushtaq Ali Trophy. The 35-year-old will be representing Chennai Super Kings (CSK) in the upcoming edition of the Indian Premier League (IPL), after being traded by Rajasthan Royals (RR).