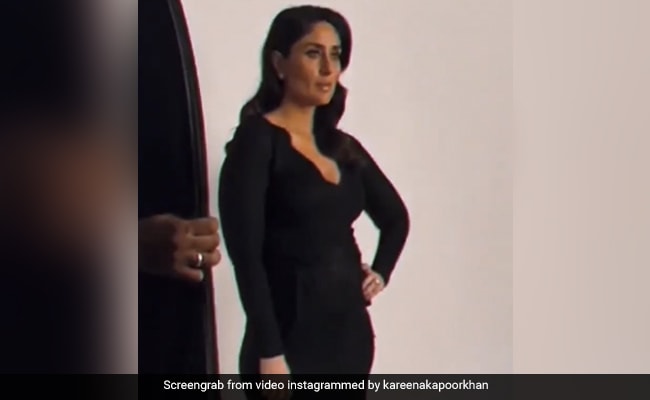 Kareena Kapoor in a still from the video. (Image courtesy: kareenakapoorkhan)

Kareena Kapoor, on Saturday, shared a BTS video from one of her shoots and accompanied it with a sassy caption. The actress, dressed in a stunning black outfit, can be seen posing for a photoshoot on the set. She looks glamorous as always. Going by the post, it appears that the video was shot some time ago. However, it is Kareena Kapoor‘s caption that is winning the Internet. The actress, who is expecting her second child with husband Saif Ali Khan, wrote: “If I ever let my head down… It’ll be to admire my heels.” Cool, no? Check out Kareena Kapoor’s post here:

The actress recently shared a glimpse of her new home on Instagram. Seen yet?

In terms of work, Kareena Kapoor made her debut in Bollywood with JP Dutta’s 2000 film Refugee. She is known for her performances in films like Jab We Met, Ra.One, Tashan, Good Newwz, 3 Idiots, Heroine, Aitraaz, Kurbaan, Talaash, Asoka, Bodyguard, Omkara and Veere Di Wedding among others. The actress was last seen in Angrezi Medium, which also featured late actor Irrfan Khan, Dimple Kapadia, Radhika Madan, Pankaj Tripathi and Deepak Dobriyal.

Kareena Kapoor’s upcoming projects are Karan Johar’s period drama Takht and Lal Singh Chaddha, in which she will share screen space with Aamir Khan. Both Lal Singh Chaddha and Takht are slated to release on Christmas next year.