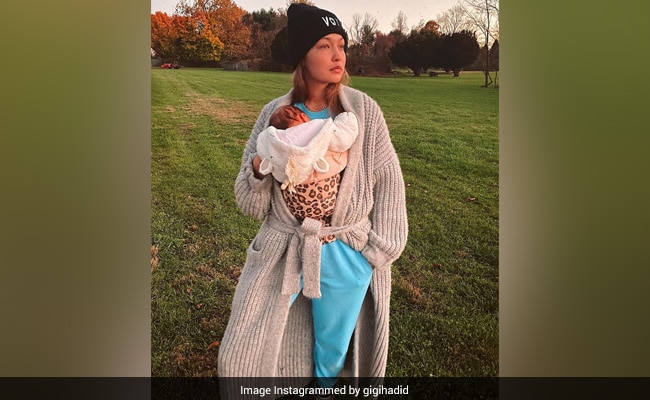 Gigi Hadid, who welcomed her first child with boyfriend Zayn Malik in September last year, revealed the name of her baby daughter in a very subtle way on social media. No, the supermodel didn’t share a separate post to announce the little munchkin’s name, she just changed her Instagram bio. The top of her bio now reads: “Khai’s mom.” So cool, Gigi Hadid. The baby’s name is somewhat similar to Gigi’s sister and model Bella Hadid’s middle name – Khair. Gigi and Zayn Malik’s daughter turned four months old this week. Gigi shared the first picture of her daughter on social media almost a month after her birth but more on that later. First, check out Gigi Hadid’s new Instagram bio here:

A couple of days before Christmas last year, Gigi Hadid shared a couple of pictures – two of them feature her posing with her little daughter. Take a look at them:

In September, Gigi Hadid and the singer announced the good news on social media with adorable posts. While the supermodel posted a super cute photo of her newborn daughter’s tiny fingers clutched onto her own and wrote: “Our girl joined us earth-side this weekend and she’s already changed our world. So in love,” Zayn Malik’s caption read: “Our baby girl is here, healthy and beautiful. To try put into words how I am feeling right now would be an impossible task. The love I feel for this tiny human is beyond my understanding. Grateful to know her, proud to call her mine, and thankful for the life we will have together.”

Gigi Hadid, a supermodel who has appeared on several prominent magazine covers, has walked the ramp for ace designers like Chanel, Marc Jacobs, and Jean Paul Gaultier among many others.