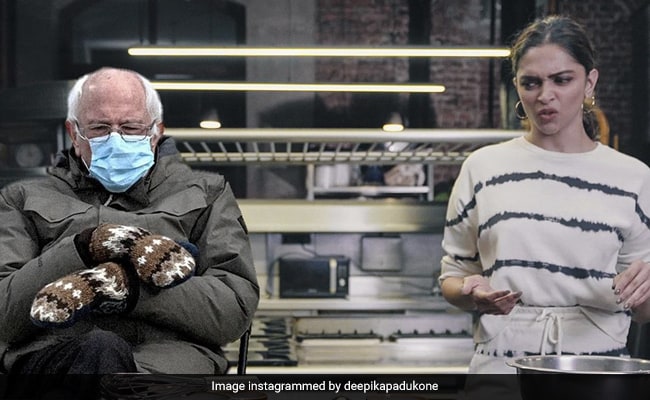 Deepika Padukone is the latest Bollywood celebrity to join the viral Bernie Sanders meme fest. The actress, on Saturday, shared her own version of the meme and asked her Instafam to caption her picture. For the unversed – a couple of days ago, at the US presidential inauguration, US Senator Bernie Sanders arrived wearing a heavy winter jacket and patterned mittens, triggering a meme fest on the Internet. Picture of Bernie Sanders sitting cross-legged on a chair in his anti-fashion outfit among the glamorously dressed guests has now taken over the Internet. Not only netizens but many Hollywood and Bollywood celebs have also cracked us up by sharing their photoshopped pictures with the US Senator.

Coming back to Deepika Padukone’s post, it features the actress standing in a kitchen with Bernie Sanders sitting next to her. Her expression is priceless. “Caption this!” Deepika wrote in her post and a few minutes later, her husband, actor Ranveer Singh, commented: “Namak zara kum daalna beti.” ROFL.

Siddhant Chaturvedi, who will be seen alongside Deepika in their new film and who has also worked with Ranveer in Gully Boy, also dropped a comment or should we say a caption suggestion that read: “When you realise Rasode mein ye the...”

Deepika Padukone has started afresh on social media this year. After deleting all of her posts from Instagram and Twitter, she shared an audio diary on January 1, followed by pictures from her Ranthambore trip, her childhood and her shoot diaries.

Earlier this week, the actress revealed that she used to binge-watch the 1980s TV show Small Wonder as a kid. “I remember coming back from school and looking forward to watching Small Wonder. It was a show that lasted for about 30-40 minutes if I am not mistaken. My most favourite character from the show was Vicki. I thought she was spunky, emotional and intelligent. I think the one thing that I was the most fascinated by was the fact that a robot could cry. But at the same time, I found her extremely lovable and endearing,” she said in her latest audio note.

Deepika Padukone will be seen alongside Shah Rukh Khan in Pathan. She also has a Shakun Batra film, which will also star Ananya Panday and Siddhant Chaturvedi and a project opposite Hrithik Roshan, titled Fighter, lined up.