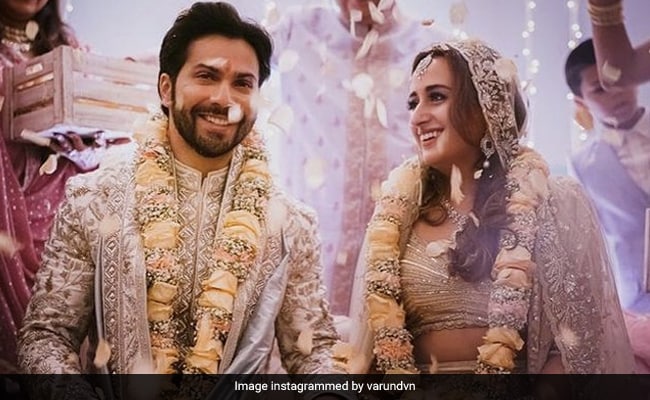 Just married Varun Dhawan made his changed relationship status “official” as he introduced new bride Natasha Dalal on Instagram with a heart-warming post. “Life-long love just became official,” he wrote, prompting a barrage of congratulatory messages from his celebrity friends in the comments section. Deepika Padukone, who too had a strict no-phone policy at her wedding just like Varun and Natasha, showered the couple with a whole lot of love: “Congratulations you two! Wishing you both a lifetime of love and companionship,” she wrote. “Congratulations VD and Natasha. Wishing you both a lifetime of happiness, growth and togetherness,” wrote Anushka, who just welcomed a baby daughter. Anushka and Varun are co-stars of 2018 movie Sui Dhaaga. “Congratulations to both of you,” commented Katrina Kaif, who is one of Varun’s closest friends. 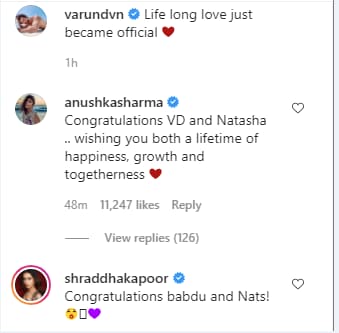 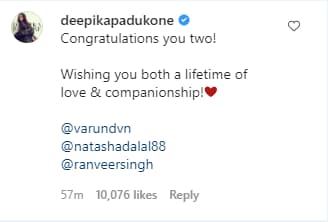 Parineeti Chopra was one of the first ones to congratulate the newlyweds: “Congrats VD and Natasha! So happy for the both of you,” she tweeted.

Congrats VD and Natasha!! 💕 Sooo happy for the both of you 💕💕 @Varun_dvn#NatashaDalalpic.twitter.com/9E2Im3aRe6

Addressing Varun and Natasha with personalized nicknames, Shraddha Kapoor wrote: “Congratulations, Babdu and Nats.” Shraddha Kapoor co-starred with Varun in ABCD 2 and Street Dancer 3D. “Congratulations bro,” commented Tiger Shroff while Karan Johar and Manish Malhotra, who were among the handful of celebrity guests at the wedding, filled up the comments section with red hearts. 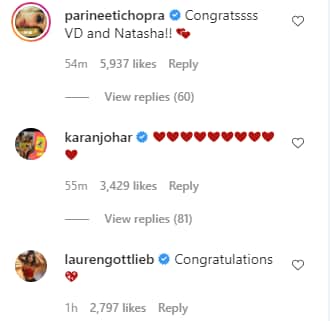 South actresses Samantha Ruth Prabhu and Shruti Haasan too dropped in sweet messages for Varun and Natasha. “Congratulations and wishing you both light and love,” wrote Shruti while Samantha added: “God bless the both of you, congratulations.” 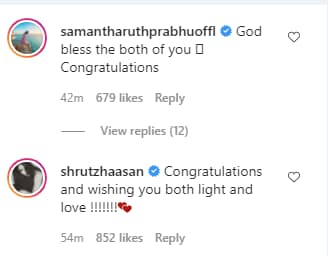 Varun Dhawan and Natasha Dalal are childhood sweethearts. They got married at a strictly private wedding in Alibaug on Sunday evening. Keeping COVID-19 protocols in mind, Varun and Natasha reportedly had a limited guest list of 40-50 names. The wedding festivities began on Friday, when Varun and Natasha travelled to Alibaug with their families. Their wedding itinerary also included mehendi and sangeet ceremonies. Varun and Natasha will reportedly host a grand wedding reception in Mumbai later.