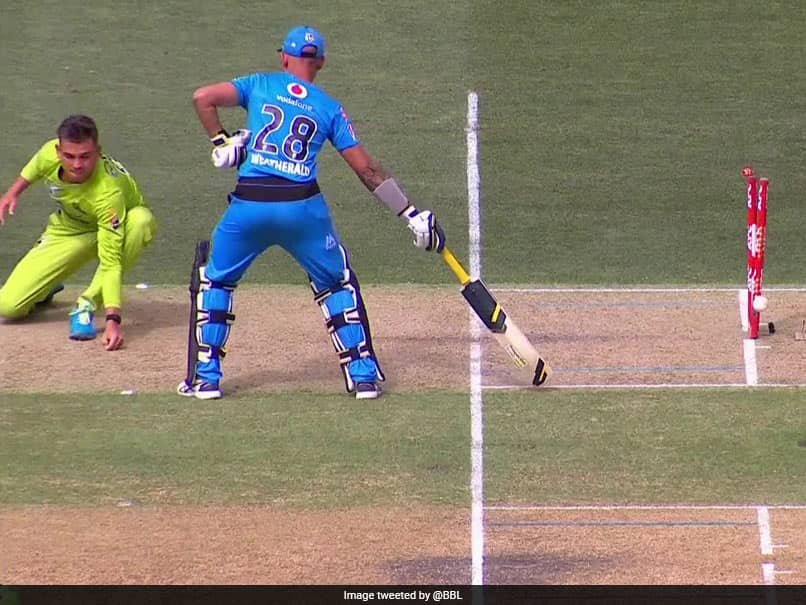 Jake Weatherald was found short of his ground at both ends in a Big Bash League game on Sunday.© BBL/Twitter


Adelaide Strikers opener Jake Weatherald found himself short of the crease at both ends of the pitch in a bizarre dismissal during a Big Bash League match against Sydney Thunder on Sunday. In the 10th over of the first innings, Philip Salt hit one back towards the bowler, Chris Green, and the ball deflected off Green’s left hand and hit the stumps with Weatherald short of his ground. In real time, though, Salt called Weatherald over for a single while the latter was ball-watching. Eventually, Weatherald found himself short at the striker’s end too as wicket-keeper Sam Billings broke the stumps.

What just happened?! Jake Weatherald somehow got run out at both ends, on the same ball!

However, a batsman cannot be ruled out twice on one ball and hence the first dismissal — at the non-striker’s end — stood, and Weatherald had to walk back to the pavilion.

Such were Weatherald’s travails in the middle that at one point both batsmen were at the same end before Weatherald caught up with the action and sprinted towards the other.

“Weatherald, what’s he doing?” called the commentator on-air at the time, followed by “terrible running.”

The run-out decision was referred to the third umpire and replays showed that Weatherald’s bat was in the air at the moment stumps were broken at the non-striker’s end.

However, had he been safe at this end he would have been ruled out at the other. Replays also showed that Weatherald hadn’t made his ground at the striker’s end either.

The commotion at the Adelaide Oval ended as “OUT” flashed on the big screen and the batsman was dismissed for 31 runs.