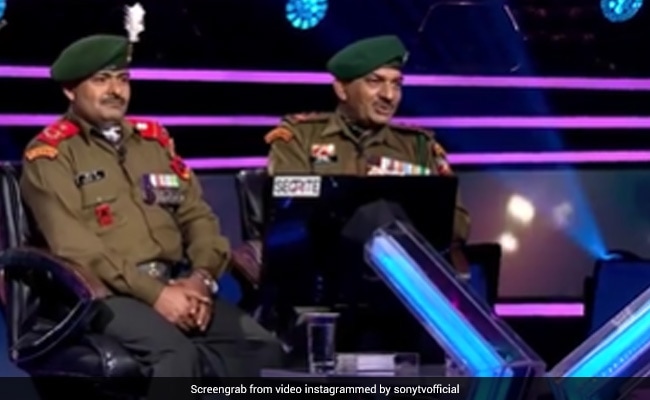 The grand finale of Kaun Banega Crorepati season 12 was special in its own way – it was dedicated to the Kargil war heroes. The finale, aired a couple of days ago the Republic Day, featured host Amitabh Bachchan remembering the spirit, valor and sacrifice of the brave hearts of the Indian Army with Param Vir Chakra, which is India’s highest military decoration for valour in war, awardees Subedar Major Yogendra Singh Yadav and Subedar Sanjay Kumar. The expert on tonight’s episode was also a Shaurya Chakra awardee – Rtd Colonel Vembu Shankar. Major Yogendra Singh Yadav and Sanjay Kumar displayed conspicuous gallantry and devotion during the Kargil War in 1999. The amount won on tonight’s episode – Rs 25,00,000 – was donated to the Army Battle Casualties Welfare Fund.

Subedar Major Yogendra Singh Yadav, on the show, recalled how he fought during the Battle of Tiger Hill, and how hard it was to see his fellow soldiers sacrificing their lives for the nation. He revealed that he was shot multiple times in his arm and leg by the enemies but he was determined to live to save other soldiers so he threw a grenade he had with him on Pakistani forces. Other soldiers from his platoon were martyred in the line of duty. After Subedar Major Yogendra Singh Yadav was taken back to base camp, he was shifted to Srinagar and then Delhi, where he underwent treatment for almost 16 months.

Subedar Sanjay Kumar shared that while he was leading his team to capture Area Flat Top in Mushkoh Valley in Ladakh during the Kargil War, they were surrounded by Pakistani troops. The enemies were continuously firing at him but he bravely fought with Pakistani soldiers even after getting severely injured. India defeated Pakistan and captured Area Flat Top during the war.

Meanwhile, here are some questions asked on tonight’s episode of Kaun Banega Crorepati 12:

#On January 26, India will complete how many years as a republic?

#What is signalled by a cricket umpire holding the ball above his head?

#Which pair of real-life brothers have key acting roles in the Hindi films “Poster Boys” and “Yamla Pagla Deewana”?

#The Naga and the Chin Hills form the boundaries between which two countries?